Log in
Welcome to Legatoria la Carta.
Free Shipping on all orders in Europe ( DHL Provider ) 🚚 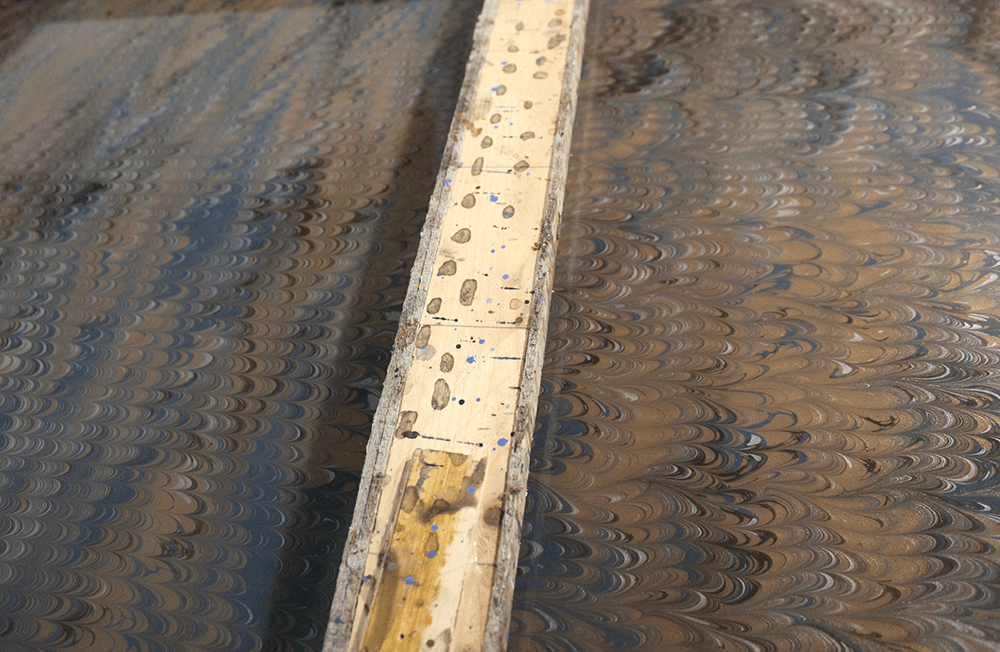 Actually there is not one but many existing techniques, because there are diverse materials you can use for a bath and different kind of colours, but the basic technique to soak a sheet of paper in a bath filled with colours or inks, allowing the drawing that has formed to adhere on the paper.

The other day Dan, Cassie and Shana, all students from the NYC campus in Florence, came by to learn about how to make marbled paper. Why? Cassie points out that Florence is known for its marbled paper, and that she wants to try it out before going back home. Dan would like to surprise his girlfriend by making a sheet for her birthday. Shana wants to pursue a BA in the arts and loves all things related to paper in general.

Kept safe from being splashed with paint by big aprons, our three apprentices are gathered around the bath that has been prepped two days prior by Arielle. « Our technique is one of the simpler ones, since we use powdered glue for wallpaper mixed with water » Arielle points out, « It is one of the quickest and most cost-effective which will allow you, in turn, to make it at home ». Indeed, this method is much quicker than the traditional one, made with marine lichen that you have to oil then filter through. What’s more, this bath made with water and glue allows you to use acrylic colours that are easily available. 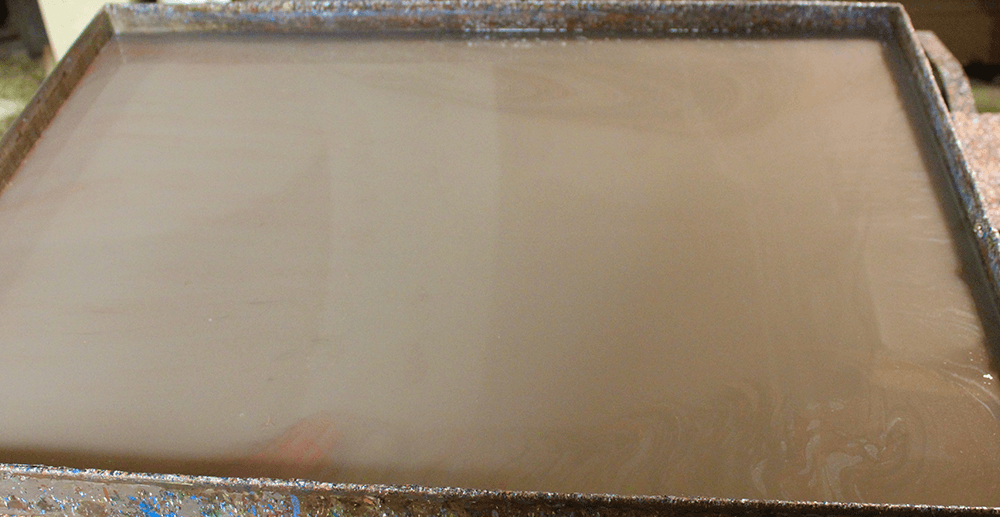 The marbled paper method is also simpler than « suminagashi » (from Sumi = ink and Nagashi = which floats), which was developed around the 12th century in Japan. In this case, the bath is simply made of water and the artists use ink mixed with ox-gall soap as the base material and a fan to make the design move slowly on the water. The design is then transferred on Washi paper (Rice paper).
« Our technique of a water and glue-based bath allows us to obtain more or less predictable results, since the colours that are thrown in the bath first spread out then stay in place. It is then easy to obtain spotted sheets of paper or use a set of combs to draw some motifs to be transferred on the paper ».
One after the other, our students are going in front of the bath, soak the brushes in some cups containing acrylic paint mixed with water, and then use a wooden beater to spray the colours on the bath. Shana, a bit carelessly, came in with white sneakers. No worries, a couple of garbage bags around the shoes does the trick. 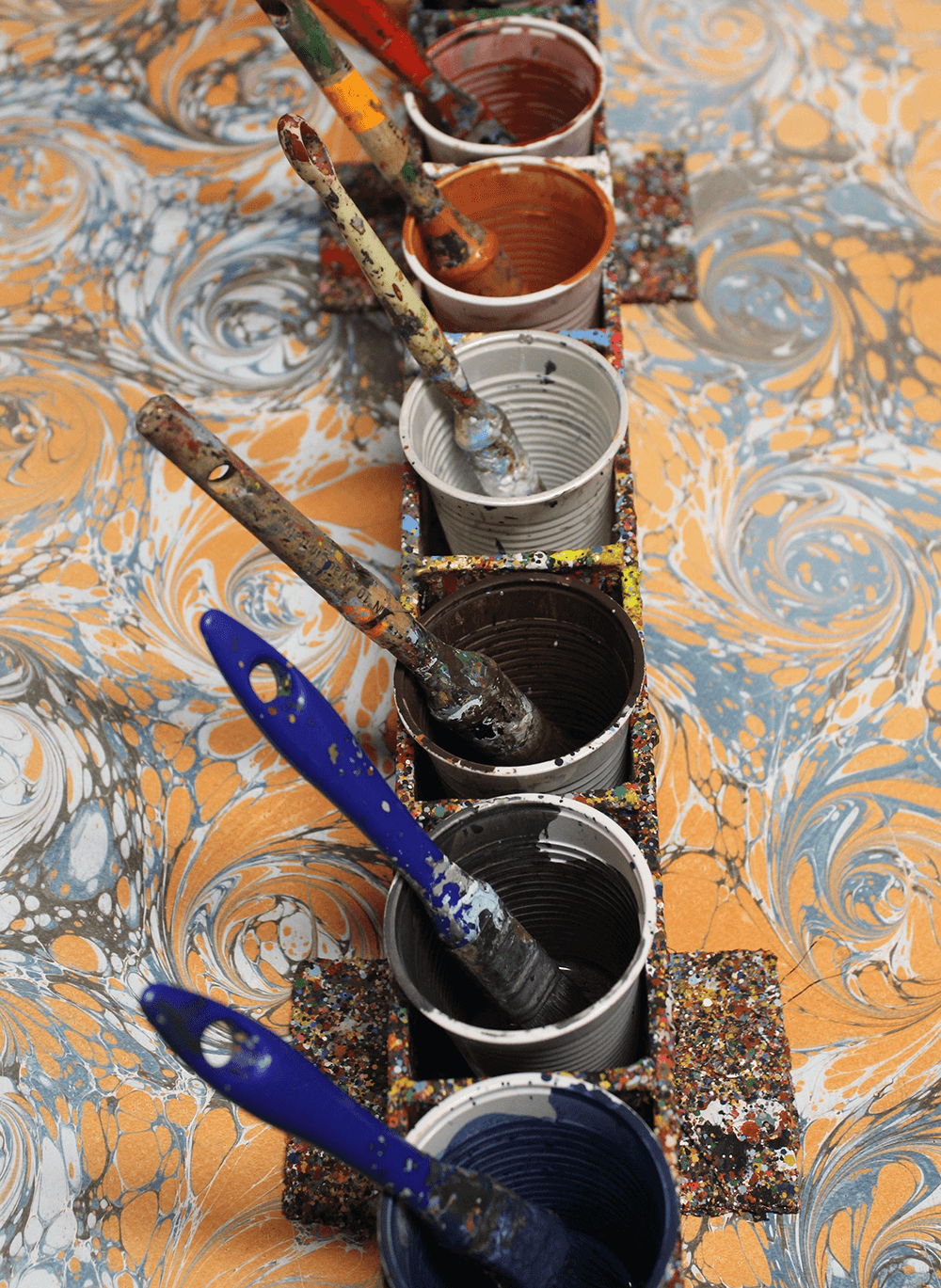 After the first colour has been applied, generally the darker one, you have to hurry and throw in the other colours, because they spread quickly in the bath and take up all the space, limiting the available surface for the other ones. 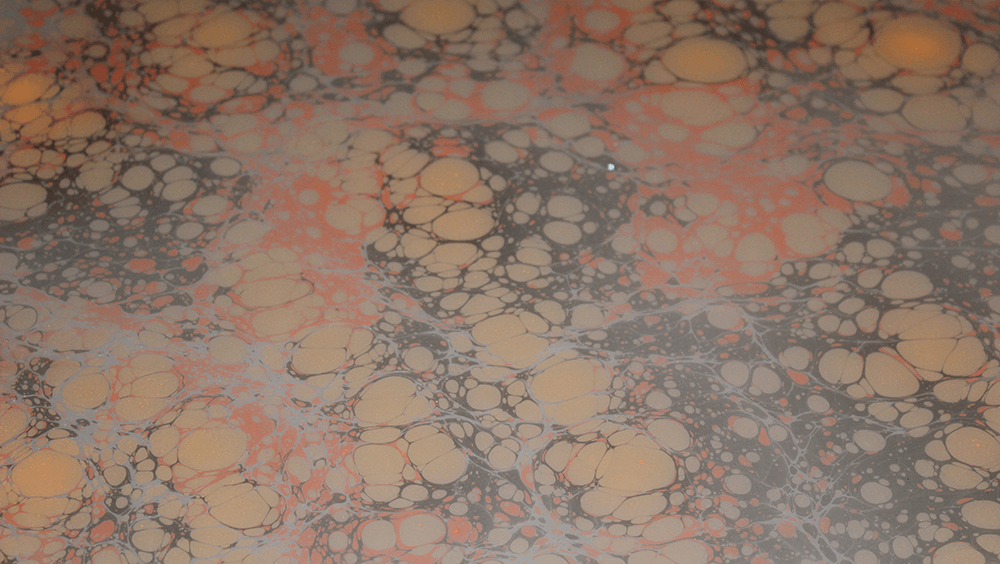 Once our students are satisfied with how their colour arrangement looks, Arielle picks up a sheet of paper, 50 cm x 70 cm format, a white or ivory 95 grams paper which will give the marbled sheet of paper an excellent solidity, allowing us to use this paper for booking, box-making or crafting jewelry. The paper is gently laid down on the bath, starting from one if the corners of of the tub, and is slowly lowered on the surface of the water, finishing on the opposite corner on the other side of the tub? You have to be delicate for this step, because there is the risk of certain areas of the paper not touching the surface of the bath, thus creating a large and white spot called a « bubble ». 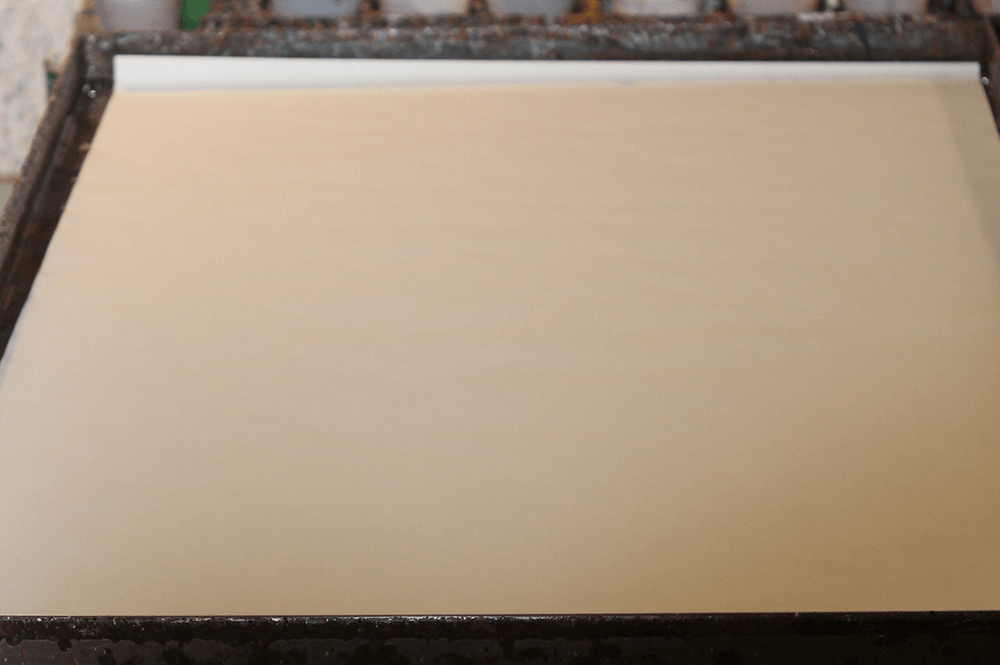 This was the first step and today’s heroes have succeeded pretty well. Next, the difficulty is going to be leveled up, as there are going to be tools involved to create motifs on the bath to be transferred to the paper. In general, Arielle introduces three types of motifs, one easy to replicate (the snail) and the other two which are very representative of traditional Italian marbled paper, but can also be found in other countries: the brushed and the peacock. – The snail is obtained by using a chopstick (yes, the one you use to eat) and doing a whirlpool movement with your hand at a regular rhythm on the bath. 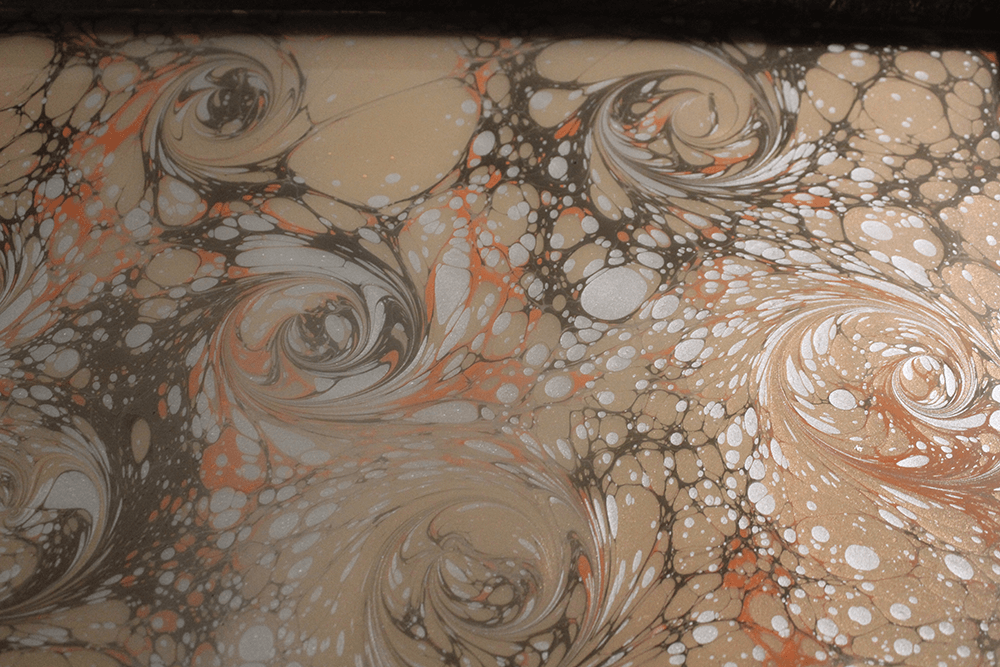 – The brushed and the peacock are obtained with combs made by bookbinders using wooden sticks and needles or nails stuck with equal distances between them on the wooden bases. The wooden stick must have the size of the length or width of the tub, and the nails have to be placed at the same exact distance between one and the other, but this distance can be smaller or larger depending on the motif that you want to obtain. 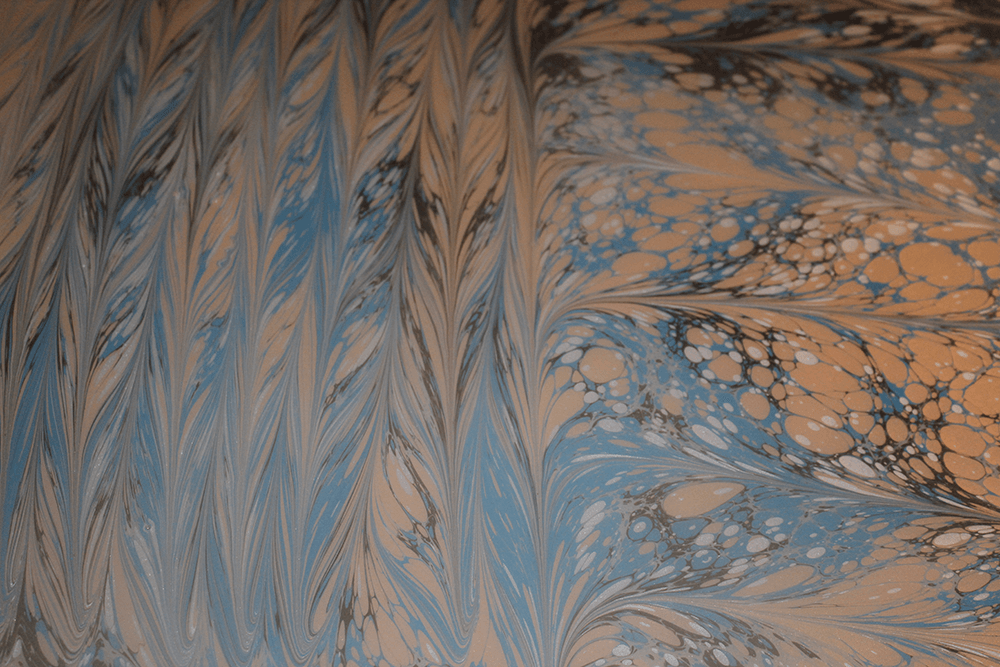 – For the brushed motif, once the colours are placed on the bath you have to « break the colours », which means using a chopstick in an up-and-down motion from one edge the tub to the other, first alongside the length and then the width. Once the colours are broken, you take the comb and start on the top of the tub and rhythmically make your way down the bath, making sure that the extremities the comb are always on the same level. As you can see, marbling is nothing magical, it just requires a little bit of mastery and most of all a lot of patience. 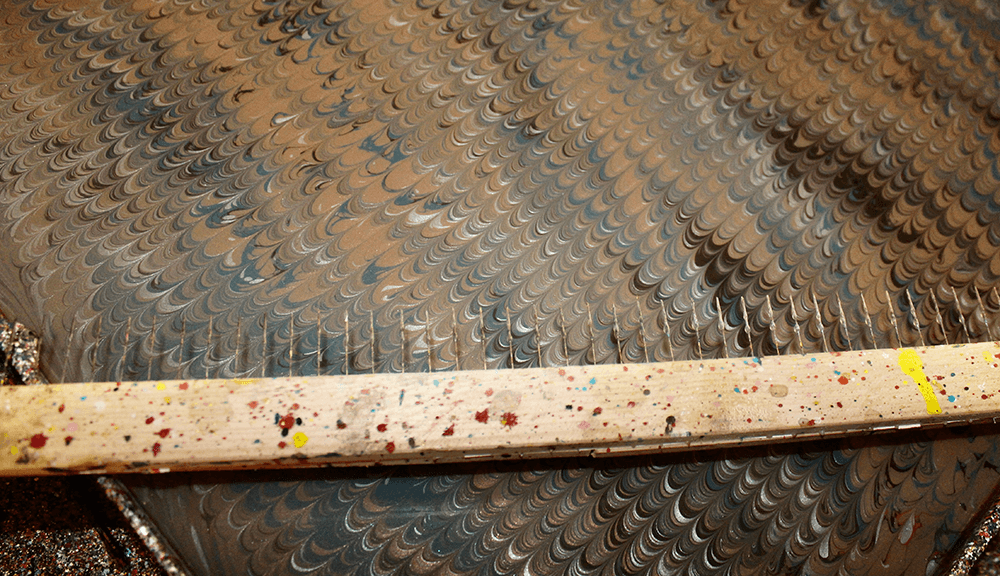 – The famous « peacock » is obtained by repeating the previous step, then using a second comb. This one is different because it’s made of not one but two rows of nails, disposed in an alternating pattern. This one too requires a little bit of mastery, because the movement is also obtained by making your way down the bath, but this time rhythmically moving left to right, then right to left. Generally, the result is seldom satisfactory on the first try when it comes to newcomers.

Cassie didn’t want to try the peacock as she was satisfied with the result she had obtained with her brushed motif and didn’t want to ruin it. Shana did a good job, even if the movement wasn’t very regular and the shapes came out a little wonky. Dan also tried it, but decided to give the sheet with the snail motif to is girlfriend. 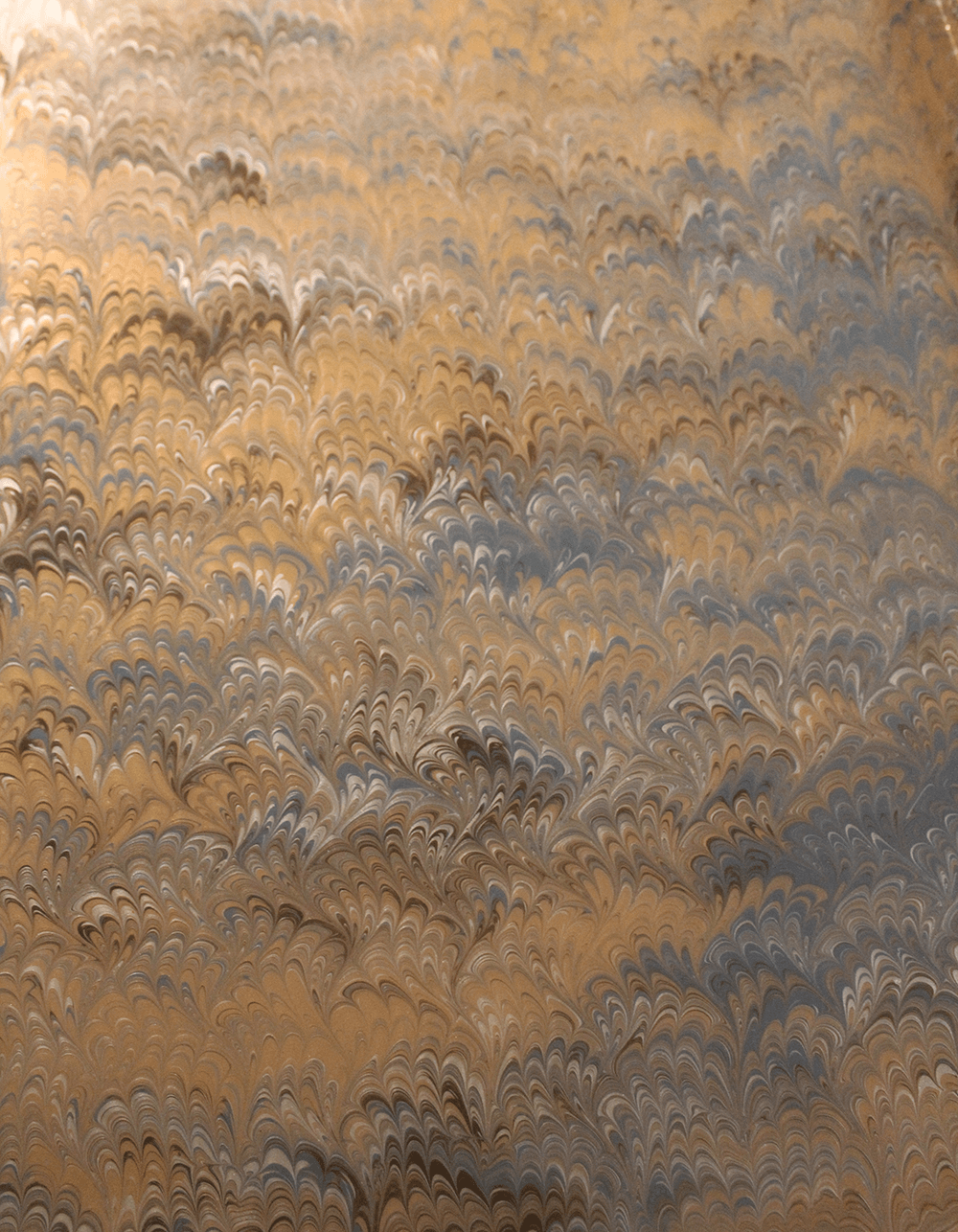 All in all, a good afternoon spent laughing with your friends and trying your best, as well as clapping your hands and a good memory to bring back from Florence.

Leave your thought here Cancel reply
Back to top